University of North Texas Libraries is excited to announce the completion of a project to digitize and make freely available the Texas Jewish Post. This project was funded primarily through a grant from the Institute of Museum and Library 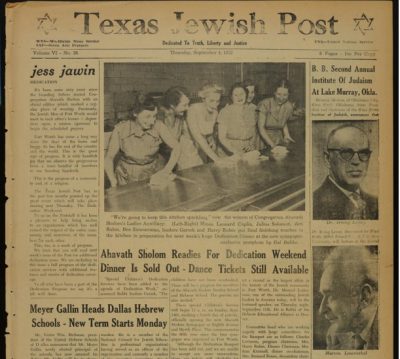 Services (IMLS) and the Texas State Library and Archives Commission (TSLAC) as part of TSLAC’s TexTreasures competitive grants program. This project was also funded in part by private donors, which was very helpful due to the breadth of the collection.

The Texas Jewish Post has served the Jewish community in the Dallas-Fort Worth Metroplex and Texas since Shelden Beren first began publishing it in January 1947. Published primarily in English and secondarily in Hebrew, the Texas Jewish Post changed hands in 1948, to the ownership of Jessard A. “Jimmy” Wisch. Since 1948, many members of the Wisch family have been involved in maintaining the newspaper, and now the title is published by Sharon Wisch-Ray, the daughter of Jimmy Wisch. The Jewish Telegraphic Agency, a non-profit organization dedicated to providing coverage of political, economic, and social developments affecting Jews globally, provides wire reports to the Texas Jewish Post. Correspondents for The Post contribute coverage from Israel and Washington, D.C., making it both a state, local, and national newspaper. Multiple generations of readers have reported to the Wisch family that it is their first source for news in the north Texas area as well as in the Jewish community.

The Wisch family’s legacy lives on through the Texas Jewish Post. Jimmy Wisch passed away on January 26, 2002. Rene Wisch passed away on November 1, 2010. Their lifetime of service to the Jewish community in the Dallas-Fort Worth Metroplex will not be forgotten, especially now that their newspaper is freely accessible on The Portal to Texas History in perpetuity, for generations of researchers to come. 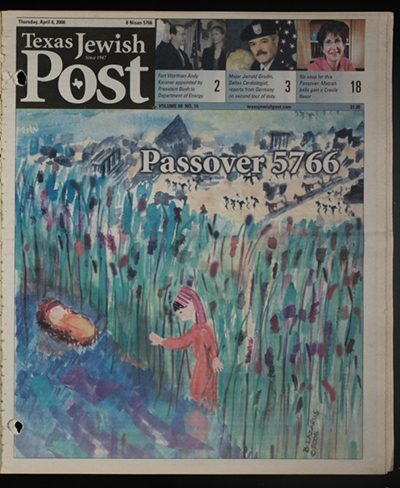 Prior to this grant award, the Texas Jewish Post collection only existed in paper format, with neither a complete digital nor microfilm duplicate. The publisher, Sharon Wisch-Ray, has provided this collection to University of North Texas Libraries to digitally preserve it for long-term research and education access. Open access to this newspaper’s archive, via The Portal to Texas History, will benefit researchers interested in learning about the Jewish experience from the mid-twentieth century to the present day. The materials digitized through this grant represent 59,360 pages in 2,763 issues of newspapers.