Tim Gieringer just can’t stop himself from historical tourism, and I caught him looking at El Paso, Borger, and Dallas this month.  He offered to write the August post, and when I saw what he came up with, I thought everyone would enjoy it.  Happy August, everyone!

Part II, continued from May’s “Shopping for Houses in Newspapers”

We look at lots of newspaper pages here at the Texas Digital Newspaper Program. Lots. In the course of our work, we can’t help ourselves from stopping to read some of the articles or to admire the old advertisements and graphics. Often, when reading a story about a particular person or event, I’m driven to investigate further to find out how the story ends. And as someone with an affinity for old buildings (see previous post), I’m often finding myself doing some “Google Tripping” to find out the fate of these buildings I see in the newspapers.

Google Tripping for me is simply the act of looking up a location on Google Maps Street View to see what it looks like today. Newspapers of the past are filled with announcements of new constructions, advertisements for real estate, event listings, etc., that offer a glimpse into the history of our built environment. As you will see in this post, there are some happy endings, some hopeful stories, and inevitably some losses.

First up, we take a trip to El Paso. While working on the metadata for our El Paso Times and El Paso Herald newspaper collections, I quickly realized that there was a goldmine of real estate advertisements in these papers, many of which included photographs and detailed information. I got caught up in one issue in particular, from August 25, 1917, of the El Paso Herald. In fact, I was so enmeshed, I had to stop myself from making this entire post about the buildings found in this issue.

From El Paso, I was finally able to select two buildings for this post. The amount of attention devoted to these homes shows that they were clearly significant structures at the time. First up is a home that is still going strong with beautiful landscaping and even some classy topiary, seen below.

The former residence of H. J. Ponsford on Wheeling Street, seen in the picture above left, was noted in the 1917 issue for its well maintained landscaping. As you can see in the above right picture, almost 100 years later, the house looks virtually the same. 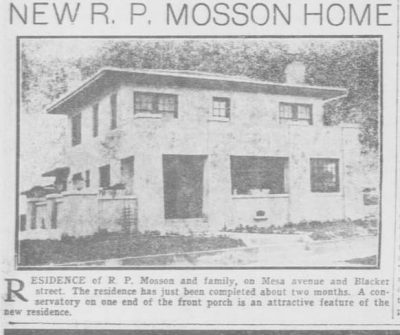 Now for something that has changed roles a bit, we look at the former R. P. Mosson home located at Mesa Avenue and Blacker Street.  At first glance, a passerby may not associate the former single-family home on the left with the business location below, but a closer look reveals that the roof-line matches and that it even retains its two original chimneys. 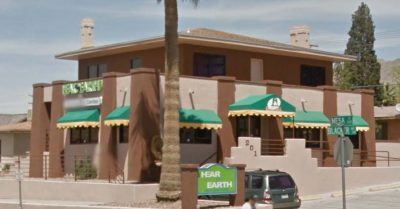 The side porch and the front porch with a conservatory have been altered, but their outline is still recognizable. I’ve quickly learned that a paper with extensive real estate advertising makes it easy to get carried away Google Tripping. But sometimes you come across things serendipitously that need to be looked into.

While looking for a different building (that no longer exists) while Google Tripping in Borger, Texas I stumbled on a huge theater that piqued my interest. A quick search through the Borger Daily Herald resulted in this advertisement for a new 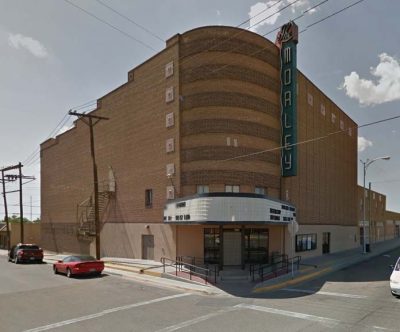 fireproof theater opening in Borger. Amazingly, The Morley Theatre (seen left) is still showing movies today! I wonder if they still have the “ladies’ cry room” or “smoker?” While these articles made the Google Tripping easy by providing addresses or cross streets, occasionally some digging is required to find the current location. 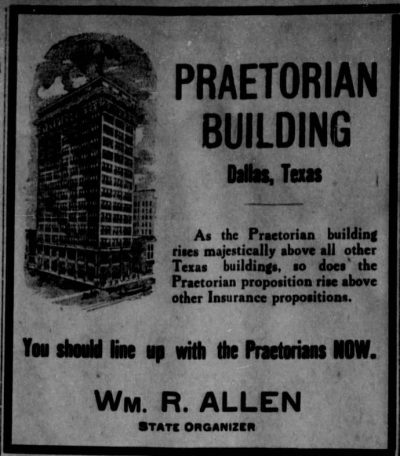 Recently, I also learned about The Praetorian Building, the first skyscraper, not just in Dallas, but in the entire Southwestern United States. There are many mentions of this famous building on The Portal to Texas History, including these advertisements. Reading about the history of the building was rather sad and too complicated to dive into here. Unfortunately, the building was razed a few years ago, which is too often the outcome for many buildings I search for, but what replaced The Praetorian Building surprised me, and I’d like to think that the ghost of The Praetorian Building is still keeping an eye on things in Dallas. I would love to keep Google Tripping today, but more newspaper metadata awaits. Now it’s your turn. Armed with the information provided by the Texas Digital Newspaper Program you can now take your own Google Trip!