As the world prepares for “Star Wars: The Force Awakens” to come out on December 18th, we in the Digital Newspaper Unit are hopping into our newspaper time machine to check into the first Star Wars movie reviews and news.  The movie was initially distributed in limited release in May 1977.  As the article appearing in the Rio Grande Herald, titled, “‘Star Wars’ Raking in Millions” summarizes, Star Wars first opened to 45 theaters, and in 12 days brought in $5.2 million in sales, sweeping the world and almost doubling Fox Studio’s stock at the time of the movie’s release.

From UNT’s own NT Daily, we have a terrific review that includes the sketch in this blog post, on the left. 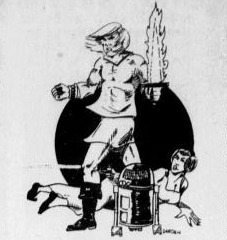 According to the review, “‘Star Wars’ features the most cosmic special effects in memory.” Unrelated but also interesting: on the same page of the review is a photo, “Dueling Banjo?” which displays a young David Iles with a terrific ’70s hairdo, wielding what appears to be a shovel-shaped sword.  (David Iles also happens to be the sculptor of the wildlife statues outside the Environmental Education, Science, and Technology Building on the UNT Denton Campus.)

Of course, “Star Wars” came out before most of its top-billed cast were famous–except for Alec Guinness and Peter Cushing, and newspapers made certain to help movie-goers answer questions like, who was that tough guy from American Graffiti?

The Rice Thresher, out of Rice University, gives us an admiring and thoughtful review that especially praises the richness of the special effects.  This review also notes newcomers Mark Hamill, Carrie Fisher, and Harrison Ford.

As we move toward the end of the year in our time machine, it appears that “Star Wars” gifts were at the top of most children’s wish lists by the end of 1977, from Bellaire, to Cedar Hill, to Crosbyton.

Not everyone was sad to change out movies at the theater. According to the September 16, 1977, NT Daily article, the Campus Theater projectionists were happy to see something new arrive after playing “Star Wars” for a total of 10 weeks–and after watching it over and over again.  And if you’re curious about “so-called science fiction fizzlers” that “raked a coat-tail profit in the wake of ‘Star Wars,'” you need look no further than the November 17, 1977, issue of the Fort Hood Sentinel.  From this, you’ll get reviews of such stunning classics as “Starship Invasions” and “The Fantastic Invasion of the Planet Earth.”  (Before adding this paragraph, I checked the “Mystery Science Theater 3000” episode list to make sure neither of these movies had become an MST3k episode.)