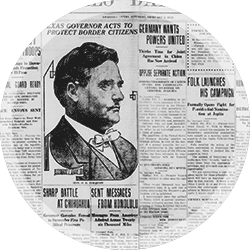 As of today, May 2nd, we celebrate 4 million pages preserved in the Texas Digital Newspaper Program, and we have some tidbits for you to help us celebrate!

The Texas Digital Newspaper Program would not exist without the generous support of many contributors, including those groups who provide newspaper content for inclusion and those who provide funding to add more newspapers every day. These groups include the National Endowment for the Humanities, who selected UNT Libraries as the National Digital Newspaper Program institution for Texas, for three contiguous cycles, and through which over 300,000 pages of historic Texas newspapers have been digitized in Chronicling America and included in the TDNP collection.  This also includes the Texas State Library and Archives Commission, who have been long-time supporters of TDNP through grant programs like TexTreasures.  From private foundations, the Ladd and Katherine Hancher Foundation have awarded newspaper digitization funding to libraries in communities with populations over 50,000, and as a result, have enabled such libraries as the Ellis Memorial Library and the Zula B. Wylie Library to add their newspapers to TDNP.

Multiple significant collaboration projects that have helped to grow this program have been with the Dolph Briscoe Center for American History, who has partnered with us in many TexTreasures grants as well as in the National Digital Newspaper Program.  Another very important partnership has been with the Abilene Library Consortium, with whom we have partnered on many projects to make local history freely available and digitally preserved. The most recent collaborative project has been with the Texas Press Association, in a noteworthy collaboration with NewzGroup, to preserve PDF newspapers created by TPA member publishers. This body of newspaper content represents 457 paid-circulation newspapers.  In the cases of newspapers that have been scanned from microfilm or physical page, the PDF content caps an entire newspaper run, up to a date specified by the publisher.

The Texas Digital Newspaper Program is the largest, freely-accessible repository of newspapers in Texas, and it is among the largest in the U.S. As such, this collection represents a significant hub of research for UNT faculty and students. In 2015, in furtherance of its commitment to digital preservation, UNT Libraries completed a self-audit of their digital repository policies, documentation, and infrastructure in accordance with the Trustworthy Repositories Audit & Certification: Criteria and Checklist (TRAC). The news content, including both digital newspaper and news video content, represents the largest single collection in the UNT Libraries’ Digital Collections. Full documentation and appendices are available here.

One additional milestone has also happened this month. The Portal to Texas History has released a beta design of the Portal that we hope you’ll visit. If you see a red “Feedback” flag appear in the bottom, right-hand corner of the screen as you’re perusing the beta, please don’t hesitate to click on it and tell us what you think about the beta design.

We also have a newspaper scavenger hunt for you. This hunt comes from all of the Digital Newspaper Unit staff.  We look at newspapers all day, every day, and we really enjoy finding new bits of trivia and new people to talk about in the TDNP blog.  We hope you find these puzzles as much fun to solve as we had putting them together.  Come back next month for the answers!

1)    This famous musician hails from Lubbock, and according to one newspaper, kept an opossum as a pet when he was a child.  Who is the musician, and what newspaper talks about this?

3)    In 1946, future Archer City celebrity Larry McMurtry lost his dog.  How old was he when he lost his dog, and what kind of dog was it?

4)    What is Katherine Stinson famous for, and in what newspaper issue can we read about her?

5)    What city reported on a giant sea monster being turned over to Dr. Agustin Cabrera Diaz for research, and when?

6)    What is the oldest Texas newspaper on the Portal, and what is its date?

7)    What are the titles of the student newspaper published for what is now University of North Texas?

9)    This easternmost Texas county documented its courthouse restoration in its newspapers. Which county is it, and in what years did the restoration take place?

10) This newspaper from March 24, 1836, documents what incredibly important event in Texas history?

Finally, thanks to all of the Digital Newspaper Unit staff and student assistants who have made this possible.