This TDNP post was written by our own Project Coordinator, Sarah Lynn Fisher. Having just celebrated her ninth year working in the UNT Digital Libraries Division, she has served in the Digital Newspaper Unit for seven of her nine years as a coordinator for multiple newspaper grant projects. Currently, Sarah Lynn is working on a grant for the National Endowment for the Humanities-sponsored, National Digital Newspaper Program (NDNP), to digitize 100,000 pages of Texas newspapers in Chronicling America. She has prepared this guest blog post in preparation for essays she will create for the NDNP grant award.

In September of 2016, the UNT Libraries’ Digital Newspaper Unit received a TexTreasures grant from the Institute of Museum and Library Services (IMLS) and the Texas State Library and Archives Commission (TSLAC) to digitize historic newspapers from Texas counties located along and near the border with Mexico. The TexTreasures competitive grant program aims to help member libraries increase the accessibility of their collections. The Texas Borderlands Newspapers Digitization Project grant supports The Portal to Texas History’s goal of including the histories of communities from the entire state of Texas. Newspapers from many of the counties and communities in this region were previously not represented in the Texas Digital Newspaper Program (TDNP).

Since the start of this grant award, TDNP staff have been busily locating and digitizing newspapers for the Texas Borderlands Newspaper Collection on the Portal. New newspaper titles now available in the Texas Borderlands Newspaper Collection represent Kimble, Pecos, Kleberg, and Reeves Counties in south-central and southwest Texas from the years 1908 to 1924. News reporting in these issues include discussions of the unique agricultural, geographical, and social challenges encountered by residents in these Texas regions.

When completed, digitization of The Fort Stockton Pioneer, published in the Pecos County seat of Fort Stockton, will include nearly two decades of issues from this former army camp along the Pecos River. From 1858 to 1886, U.S. Army 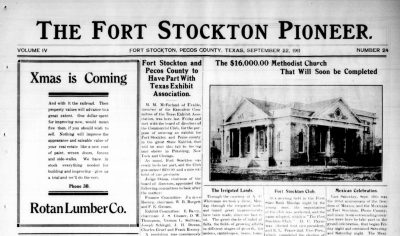 Infantries were stationed at Camp Stockton, later Fort Stockton, to protect travelers heading west to Mexico and California who stopped in this area to access natural springs, as Tour Texas explains. As Fort Stockton transitioned from army post to ranching community, the theme of protection continued to be represented in issues of the newspapers. In this article from the May 19, 1916, issue, Dr. Homer Powers describes his capture and escape from “bandits” who raided a store and mines nearby Glenn Springs and Boquillas, taking several captives along the way, Dr. Powers among them. As the bandits headed with their “loot” across the Rio Grande into Mexico, Dr. Powers and his fellow captives were able to disarm their captors and return to Texas where they received “a touchingly hearty welcome from the Sheriff’s posse, river guards and soldiers.” The Fort Stockton Pioneer has been published continuously since 1908. The Portal will include issues published from 1908 to 1922. 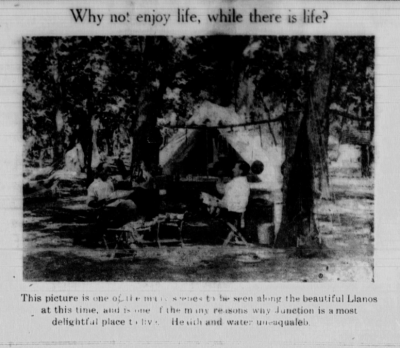 Another Borderlands newspaper title currently available on the Portal is The Junction Eagle, published in Junction, the county seat of Kimble County. The Junction Eagle is not the town’s first newspaper (that honor goes to the West Texas), but it has been published continuously since 1882, according to the Junction Eagle website. Issues currently on the Portal begin in 1919. The Junction city history tells us that its city name refers to the town’s geographic location at the intersection of the North and South Llano Rivers. Junction was a small community with only a few hundred residents until the “Four Mile Dam” was constructed on the South Llano River. The dam’s infrastructure enabled the growth of the town, providing water for the town’s residents, irrigation for farming, and as well as generating power for mills and mining . The dam provided entertainment for residents as well. The August 13, 1920 “Telegraph Tellings” column notes,
Mrs. Conde Hardeman entertained the Henderson house party last Tuesday afternoon at the dam with supper and bathing and quite an enjoyable time was spent by all.

These brief glimpses into the lives of rural community residents may sometimes only be found in the town’s newspapers, a fact that underscores the importance of TDNP’s newspaper preservation efforts. TDNP will continue to add newspapers to this collection throughout 2017. Upcoming titles include The Daily Ranchero from Brownsville in Cameron County, the southernmost county in Texas.