The Texas Borderlands Newspaper Collection hosts materials from border and near-border counties in south and west Texas. This collection includes 62 titles and spans 1859-1998. 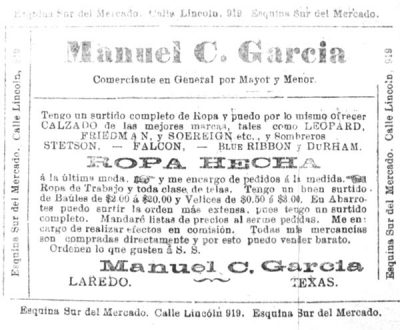 This blog post will explore one newspaper title in particular, from the early colonial city of Uribeño, Texas. If you tried to find Uribeño in Google Maps right now, you would have some trouble because it no longer exists. We’ll return later to the reason behind this, but for now, let’s travel back to 1908, when the community was prosperous enough to support a newspaper office. 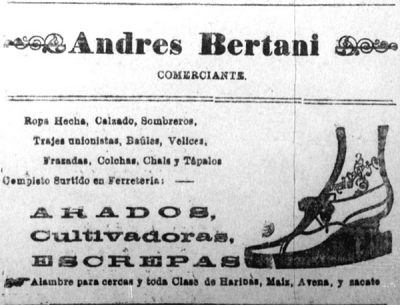 El Aldeano (“The Village”) was first published in 1906 for the city of Uribeño , and the issues we have available in the Borderlands collection are from its second year, 1908. In this Spanish-language publication, you can read ads for stable and pasture of animals, learn about the importance of cod liver oil to good health, or, perhaps most interestingly, learn about the merchants who ran businesses in Uribeño and its neighboring towns. Julian Treviño, in Laredo, served the people of Uribeño in wholesale and retail, as “the friend of poor and rich and the most popular both because it sells at the cheapest prices.” Manuel Garcia, also in Laredo, paid for an advertisement to say, “I have a complete assortment of clothes and I can therefore offer footwear from the best brands, such as Leopard, Friedman, and Sovereign, etc., and hats–Stetson, Falcon, Blue Ribbon, and Durham. Clothes made to the latest fashion, and I take care of custom orders,  work requests, and all kinds of fabrics.” Marketing to the wider farm and ranching community, Andres Bertani advertises, “Clothing made, footwear, hats, plough cultivators; wire for fences and all kinds of flours, corn, oats, and sacate.”

If you are interested in imagining daily life in Uribeño, you can read about the Zapata County settlements in the Bulletin of the Texas Archeological Society, Volume 70, 1999, which explains, “The Spanish-Mexican colonial ranch house is a simple, masonry structure and notably most, if not all, of the building’s significant architecture features are all associated with defense. The exclusive predominance of fortified ranch architecture through the mid-19th century attests to the dangers of living on the colonial frontier. . . .Many settlers were killed or captured while protecting their homes and possessions. The inhabitants of the frontier were subjected to an unusually high number and long duration of threats, including: 1) the harshness of the natural environment; 2) the retaliation of Native tribes to non-native settlement; 3) the War for Mexican Independence; 4) a power struggle between the Texians and the Tejanos from 1836 to 1848; and 5) the vigilante actions of Texas Rangers in the Rio Grande area after statehood.”

After the residents and city survived into the mid-20th century, the area was chosen as the location for the Falcon Reservoir. According to Uribeño: The Forgotten Town, compiled by Jo Emma Quezada, “Uribeño was one of the original 5 Zapata County settlements, traced its origin to 1803, when Porción 41 was granted to José Clemente Gutierrez de Lara (1770-1805) for his service in the Spanish army. He built a ranch on Porción 41, which was named as Uribeño later but inundated by the waters of Falcon Reservoir in the 1950.” UNT Libraries’ Special Collections houses this volume about Uribeño’s history (Call number: F394.U75 M37 2002), and if you ever have interest in learning more about this early colonial community, you can request it at any time.

The Borderlands Newspaper Collection has been digitized through the support of a TexTreasures grant from the Institute of Museum and Library Services (IMLS) and the Texas State Library and Archives Commission (TSLAC).