The Texas Digital Newspaper Program has now reached 7 million pages of newspapers preserved and accessible! This represents newspapers from 198 Texas counties, contributed by 178 partners, printed in 11 languages, spanning 1813 to the present. Many Texas communities have contributed newspapers to this million pages. 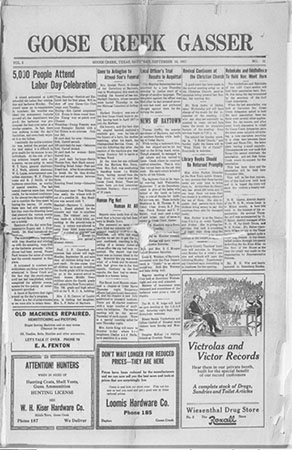 First page of the September 10, 1921 issue of the Goose Creek Gasser.

The Baytown Sun, digitized by the Sterling Municipal Library in Baytown, represents the largest single-title newspaper run in the Texas Digital Newspaper Program. This project spans over 22,000 issues, comprised of over 376,000 pages, starting in 1921 and moving up to 2016. Baytown was formed by a combination of three different cities and is situated primarily in Harris County. The newspapers from this collection also document Goose Creek, one of the original cities out of which Baytown grew. 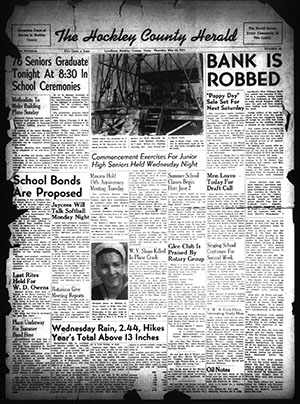 Through the support of a Tocker Foundation grant awarded to the South Plains College Library, the Hockley County Herald and the Levelland Sun have been made accessible, thus far spanning 41 years in just under 45,000 pages. Levelland became the Hockley County seat in 1921 and has supported a newspaper since 1925, with the publication of the Herald. South Plains College opened in 1958, and it supports a student community population of nearly 10,000. These newspapers document the history of Levelland as it has grown from a small agricultural community to an oil and petroleum processing hub in Hockley County.

In 2018, Bill Patterson, publisher of The Denton Record Chronicle, granted permission to UNT Libraries to build access to the newspaper’s most recent years. We have loaded the first set of PDF ePrint editions thus far, documenting Denton’s past six years. We will continue to add to this collection as we are able to obtain funding to digitize the physical and microfilm issues.

The Texas Borderlands Collection hosts newspapers from counties near and along the Texas-Mexico border. This collection represents a three-year endeavor and includes interesting and unique titles from across Texas, contributed by multiple different partners. The Museum of South Texas History has contributed 11 newspaper titles, written in both Spanish and English, mostly spanning 1898-1923, with Diogenes from 1923 comprising the bulk of the collection. The McAllen Monitor has been loaned to UNT Libraries by the McAllen Public Library for addition to the Portal, and it represents McAllen and South Texas during the first half of the twentieth-century. You can read more about the Borderlands Collection in different blog posts we’ve produced over the past few years, especially if you’d like to learn more about some of the individual titles.

These titles and communities are just a few of the new additions to the Texas Digital Newspaper Program, and we encourage you to browse the collection to see what else you can find.  We are continually building onto this collection, so if you don’t yet see a date or title you need, keep looking because the collection keeps growing. We are excited, proud, and enthusiastic about the achievements this past million pages have represented, and we look forward to new titles, new milestones, and new partners during the next million newspaper pages!