This week’s author is Calaine Maulden, a student assistant in the Digital Newspaper Unit, who is also a creative writing major. Cal is preparing for graduation this year and had a lot of fun preparing this story. Where could these paths lead?

As you and your brothers wrap up a day of fieldwork, you debate how to go about seeing the circus.  You head back toward the house, with a stop at the garbage heap to snag any of the past month’s newspapers–well-read and somewhat tattered by now from being out in the elements.

You’re pretty sure you can talk Papa around no matter what. It’s Mama you really have to convince.

Mark wants to show Mama and Papa one of the circus ads. He thinks telling them about the variety of what you’ll see and learn will be enough to convince them. Jed thinks you should show your parents a description from someone who actually went there, to let them know what you’ll see so they won’t worry. The idea of just sneaking out has also been tossed into the conversation.

How do you convince Mama? 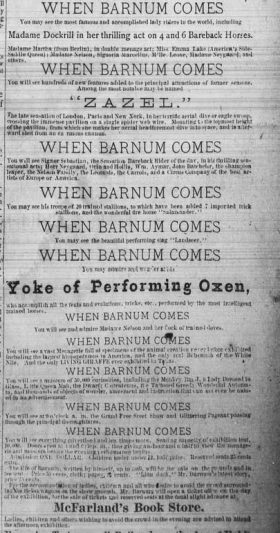 You side with Mark, and you all agree to show them an advertisement. Mark and Jed talk on and on about the performing oxen and the Lady Dressed in Glass and more curiosities than any of you can count. After a whole dinner of badgering from the boys, and a promise from you to keep them safe, Papa gives in first, and finally Mama relents. You can go to the circus all day tomorrow!

Choice 2 – Show her a first-hand description

You think Jed’s plan is the most likely to work. Between Mama and Papa, they’ll be worried but may be convinced by someone else. You show your parents the editorial about last night’s show. You point out it must be safe for the guests, especially with kids being a huge part of the audience. As you thought might happen, all three of you convince Papa first and, after a lot more talking, Papa helps convince Mama to let you go, on the condition you keep them safe. Tomorrow will be exciting, and even better, tomorrow will be something different! 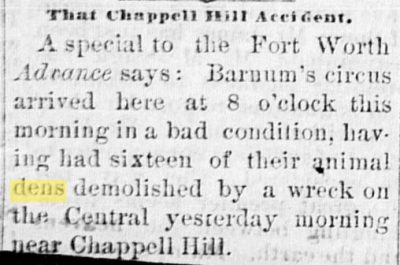 Choice 3 – Sneak out to see the animal den wreck

After going over it again and again, you all decide it’ll be impossible to convince Mama to let you go. She’s worried herself sick about Grandma Thomas, and you know she’d say she can’t risk losing you three. You decide to sneak out after dinner and see the animals in their cages. Before you leave you read in Papa’s paper that some of the animal dens were destroyed, so you all agree you must get a glimpse of their cages. Time for an exciting night out!