Calaine Maulden, a student assistant in the Digital Newspaper Unit, continues the story from last week. Last week, our protagonists had to decide whether to talk their parents into allowing them to go, or whether they should just sneak away. This week, Cal lets us find out what happens at . . .the Big Circus!

AT LAST, you’ve made it to Barnum’s Circus, your brothers in tow. The circus is amazing, representing an overwhelming influx of sights and smells. There’s so much to see, from the animals to the carnies–even the audience is a fascinating sight.

Where will you go, now that you’re finally here?

You and your brothers visit the giant.

Choice 1 – Visit the giant who used to be a slave

As you and your brothers traverse the extra-ordinary, one thing stands out, or rather, stands over. A giant–a literal giant!–is towering above a crowd around him. He is lifting logs taller than most people over his head and spinning in circles. Your brothers rush off to join the crowd, and it takes all your effort to try and keep track of them.

This is going to be a difficult trip. 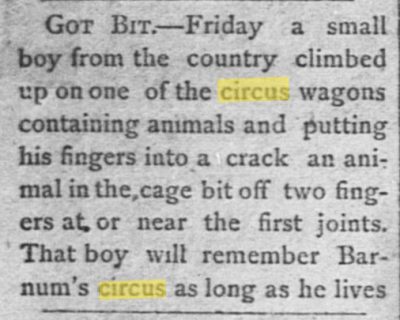 Mark grabs Jed’s and your hands and yanks you both toward the animal cages. He bubbles with enthusiasm about seeing animals he’ll likely never see again. He decides to climb the cage. You and Jed try to stop him, but he’s on top of the cage in no time. You watch in horror and feel time slow around you as he sticks his hand into the cage. The lion notices, and suddenly Mark is short two fingers.

This will be hard to explain to Mama.

You and your brothers witness a burglary!

You spend your time watching the crowd. The people are almost as colorful as the attractions. You people-watch as your brothers drag you around and chatter gleefully about the circus. Then you notice a shop with a dim light on inside. As you stare into the shop, you see someone with their face covered walking out the back with cash wadded in their hands. You’re fairly certain you’ve just witnessed a robbery, just like the one you’d read about from Mineola!

This is going to be a difficult situation.