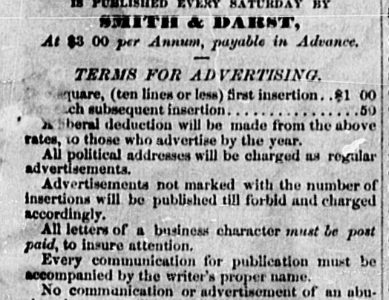 The UNT Libraries’ Digital Newspaper Unit has digitized historic issues of The Gonzales Inquirer for Chronicling America, the Library of Congress’s repository of historic American newspapers. The UNT Libraries have received National Digital Newspaper Program (NDNP) grants from the National Endowment for the Humanities (NEH) to contribute Texas Newspapers to Chronicling America. The 2016-2018 award… END_OF_DOCUMENT_TOKEN_TO_BE_REPLACED

This month we are highlighting another newspaper title digitized by the UNT Libraries’ Digital Newspaper Unit for Chronicling America, the Library of Congress’s repository of historic American newspapers. The UNT Libraries have received National Digital Newspaper Program (NDNP) grants from the National Endowment for the Humanities to work with the Library of Congress in building… END_OF_DOCUMENT_TOKEN_TO_BE_REPLACED

This award is for $200,000 and will build access to an additional 100,000 pages of Texas newspapers on Chronicling America, to spotlight community identity in Texas. This time, the news is even more exciting because these additional newspapers will be in Spanish and German. Access to these additional issues and languages in a national context will represent and support the large populations in Texas whose ancestors settled here in the 19th-century and documented their experiences in these very newspapers. In addition to adding the newspapers to Chronicling America, where Texas identity can be preserved alongside other state awardees’ newspapers, we will include these newspapers in the Texas Digital Newspaper Program (TDNP). These will serve as a jewel in the TDNP collection because they serve the descendants of Spanish- and German-speaking Texas pioneers as they explored what was then a mysterious frontier. These descendants comprise a large percentage of the Texas population, and we are proud to be able to represent them in NDNP. All of the newspapers available in Chronicling America and visible in the TDNP collection are freely accessible for research and education. As a result, we try continually to inform teachers and students about the importance of newspapers in understanding history.