This week’s blog post was researched and written by the Digital Newspaper Unit’s student assistant, Sarah Cunningham. Sarah is a dual-Masters student in History and Information Science.  In History, she has studied under Drs. Todd Moye and Andrew Torget, researching civil rights and Texas History.

The Denton Women’s Interracial Fellowship began in 1964 at the height of the Civil Rights Movement, consisting of African-American and Anglo-American women in Denton. With school integration on the horizon, the women were 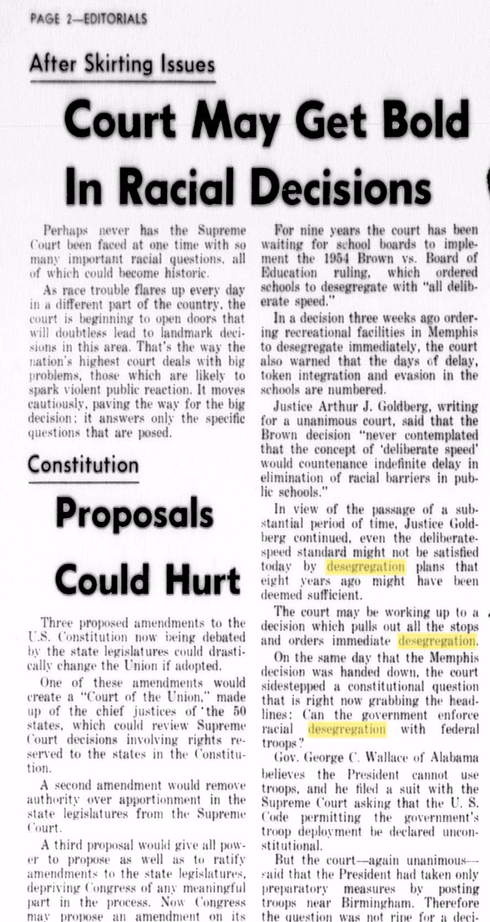 concerned about their children’s adjustments to what they feared would represent a tense process. To ease this process, the founders of the Women’s Fellowship believed that interracial harmony would curb racial tensions within the community when the women could get to know each other better. This was the start of my research of the Denton Women’s Interracial Fellowship.

My research for the Denton Women’s Interracial Fellowship began in Dr. Todd Moye’s, Director of the UNT Oral History Program, course, Techniques of Oral History. Our initial research into the history of the Fellowship began with listening to oral history interviews from the late 80s, and proceeded to re-interviewing those Fellowship members still living in Denton today. Each student in Dr. Moye’s class interviewed two women. Listening to the interviews as a class, we collectively coded them for seven major themes or topics and curated those themes into an online museum, Desegregating Denton. Subsequently, each student prepared a biography about the women they interviewed. 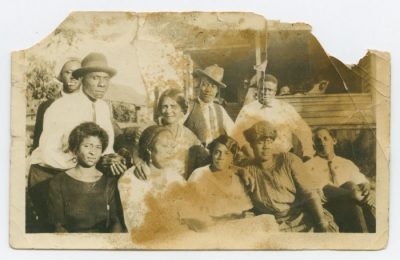 I also wrote interpretive essays about how members of the Fellowship contributed to the history of Denton. Aside from using past and present oral interviews for my biographical sketches and essays, I incorporated Texas Digital Newspaper Program titles, particularly The Campus Chat and the North Texas Daily, to understand how the history of Jim Crow segregation in Denton related to and affected the activities of these women. Researching the Fellowship and its members on The Portal to Texas History offered a user-friendly search engine with which I was able to analyze and understand the dedication to public service in the community that these women demonstrated–many were teachers in the Denton school system, including Carol Riddlesperger; Linnie McAdams served on city council; and Euline Brock became a mayor of Denton. Through this work, I learned so much about the rich history of Denton’s African-American community, Quakertown (pictured above), and how Denton became racially-segregated by the early-twentieth century.

This blog post features work written by Redd Howard about the Oklasodak newspaper. Originally from McKinney, Texas, Redd is one of our student assistants in the Digital Newspaper Unit, studying as an Art History major and French minor. Redd is also an undergraduate research fellow in Art History at UNT, working with Dr. Jennifer Way. Following graduation, Redd would like to pursue graduate studies in Art History and Library Science, with the goal of working as an archivist or librarian in museum collections. The Newspaper Unit’s Sarah Lynn Fisher collaborated with Redd in locating and writing about these gems of history.

The Borderlands Newspaper Collection, digitized through the support of a TexTreasures grant from the Institute of Museum and Library Services (IMLS) and the Texas State Library and Archives Commission (TSLAC), now includes newspaper titles from counties previously not represented in the Texas Digital Newspaper Program (TDNP), including Kleberg, Kinney, Kimble, Pecos, Uvlade, Brooks, and Reeves counties. Some newspapers in this collection are very unique and have drawn our research curiosity.

One of these unique titles is Revista Del Valle, a daily Spanish-language newspaper published in Edinburg, Texas, the county seat of Hidalgo County in southern Texas. A brief but historically-significant collection of issues of Revista Del Valle from

the year 1915 is now available on the Portal. According to the Texas State Historical Association’s Handbook of Texas Online, 1915 was the year that the arrival of irrigation transformed the region from a ranching community to the major agricultural region that it is today. The importance of farming in the region is reflected in Revista Del Valle’s ornate masthead. However, much of the reporting in these issues is devoted to the “Borderlands War” conflict, an undeclared period of conflict along the Texas-Mexico border that coincided with the Mexican Revolution, which is often overshadowed by World War I in the historical record. As the railroad brought more settlers to the region, landowners of Mexican descent were often displaced “using unscrupulous and often illegal tactics”. This led to resentment, racial tension, and ultimately extreme violence on both sides. This editorial from May 11, 1915 illustrates the urgency of a region and a world in conflict and advises against participation in future wars. 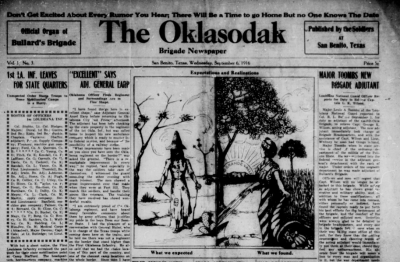 The Oklasodak, another unique title in the Borderlands collection, is a 1916-1917 “newspaper of the soldiers, for the soldiers, and by the soldiers” published by National Guardsmen from the states of Louisiana, South Dakota, and Oklahoma. Perhaps in response to the unrest along the border, the troops were stationed in San Benito, Texas under the leadership of Colonel Robert Lee Bullard, and eventually were called the Bullard’s Brigade. The newspaper was first published on August 25, 1916, and ran until February 7, 1917. The last edition stated its early and abrupt suspension due to an order for the soldiers to return to their respective homes. In the 24 published issues of the regimental newspaper, many segments include geographical and social challenges of life in a border town. The reoccurring segments, “Life of the Soldier” and “Health of the Soldier,” provided general advice to these challenges.

In one of the “Health of the Soldier” segments from the November 8, 1916 issue, Captain W. S. Shields, the camp sanitary investigator, informs the soldiers about the harmful–and often deadly–illnesses of the native population of Tampico, Mexico, including malaria and tuberculosis. In the January 3, 1917 issue, the article, “Mexican Vote Puts Town Wet,” shows some of the clashing interests or ideologies of the American soldiers and the Mexican citizens during the period. The American soldiers desired a dry city to practice obedience, attention, and initiative. However, the wet vote beat the dry vote 265 to 215.

The Oklasodak is a great addition to the Texas Borderlands Newspaper Collection. It shows a brief moment in history of the daily life in borderland and provides insight into the lives of American soldiers in the early 20th century.

In September 2017, UNT Libraries’ Digital Newspaper Unit was awarded a newspaper digitization grant through TexTreasures, the competitive grant program supported by the Institute of Museum and Library Services and made available through the Texas State Libraries and Archives Commission. This grant, the Texas Borderlands Newspaper Digitization Project II, serves as a continuation of the Texas Borderlands Newspaper Collection, which was created through the support of a 2016-2017 TexTreasures award. Through the Borderlands II award, the Texas Digital Newspaper Program will build access to an additional 23,000 pages of border and South Texas newspaper titles.

From Maverick County, we will digitize a rare set of the Eagle Pass Guide, spanning 1893-1896 and 1909-1910.  These newspapers were purchased by UNT’s Special Collections Department, and we look forward to seeing what historical treasures these newspapers will reveal after they are available in the Borderlands Newspaper Collection.  By request of the newspaper publisher, we will add another pair of South Texas newspaper titles to this collection. The first title, La Voz, was contributed by Alfredo Cardenas and published by his father in 1937.  La Voz documents political turmoil in Duval County during the 1930s, and Mr. Cardenas has given permission for UNT to include it on the Texas Digital Newspaper Program. The second newspaper, The Duval County Picture, was published by Alfredo Cardenas himself, from 1987-1998, and in talking with him about other newspaper titles for the Borderlands I project, he asked if we could also consider digitizing La Voz and Duval County Picture because they represent significant historical situations in South Texas.

This is just a small window into the complete set of newspapers will will load into the Borderlands collection. Visit and start your own research project in the Texas Borderlands Newspaper collection–you never know where your research might take you!

TexTreasures is an annual competitive grant program designed to help member libraries make their special collections more accessible to researchers across Texas and beyond. TexTreasures awards have been made possible by the Library Services and Technology Act through the support of the Institute of Museum and Library Services.

We are proud to announce awardees for the 2017 Rescuing Texas History Program, offered to provide new and existing partner institutions with $1,000 worth of in-kind materials digitization.  We never know what’s hiding in a storage building or library, and we’re proud to offer digital access to materials from these 2017 awardees: